The rules are simple. Don't talk to the men, don't communicate with the outside, stay loyal to the family. Gina tries to follow the rules, but every time she turns around there's a new rule! It's only a matter of time until she breaks one and becomes… Alejandro's Prey.

He's an enforcer, second-in-command to one of South America's leading crime lord's. Rules are his life. He gave her one year - one year to adjust to him and his rules. But his sweet little mouse broke the rules and now she's his.

Only someone else wants her, too…

Alejandro's Prey is a mafia romance novella. Though this book is part of The Queens series and takes place one year after Scarred Queen, it can be read as standalone. Guaranteed HEA, NO cheating, NO cliffhanger. 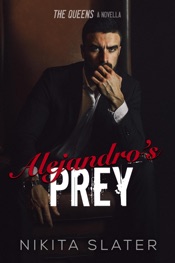